From baseball to hockey, chess and bowling, Bell employees have enjoyed extracurricular activities for generations.

For generations Bell employees have pulled together, forging an esprit de corps that helps define the distinctive Bell culture. This shared commitment, this dedication and pride has, over the years, found expression in many social and extracurricular activities.

In the winter of 1889, sixty employees of the Bell Mechanical Department organized the company's first social activity, a sleigh ride and dance, at Peloquin's Hotel in the Ahuntsic area of Montréal. After that, employees throughout Bell territory could be seen on baseball diamonds, basketball and tennis courts, on the stage, in hockey arenas, and bowling alleys. You could find tournament participants contemplating their next chess move and budding artists capturing light and form on canvas.

In 1903, The Bell Telephone Company of Canada and Northern Electric went head to head in what was to become the President's Hockey Tournament, still around today.

And baseball has been a hit with Bell folk since 1917 with teams vying for several coveted trophies.

For the non-athlete, there was the Bell Camera Club, Bell Operatic Society, Bell Orchestra and Bell Chess Club, to name a few.

Leisure activities help relieve work stress and sports leagues encourage social interaction, team-building, networking and physical activity and improve company morale. Step outside the campus, the office tower or the central office and you will find Bell people having a good time. 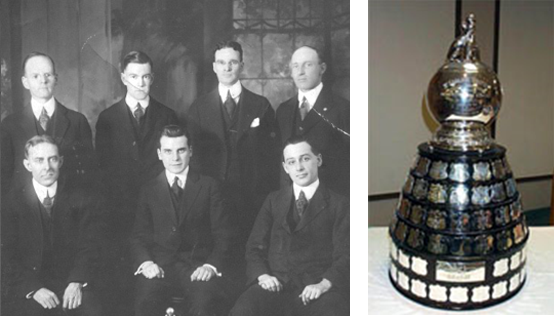