Like other public service providers, Bell was significantly impacted by the world-wide Great Depression in the 1930s. But despite financial setbacks, the company continued to improve services, extending our communications infrastructure to new areas across the country, including 16 new automatic exchanges (a step-by-step system connected telephone subscribers without the help of an operator) in 1930.

Starting in the 1920s and into the 1930s, advertising inserts like the ones below proved to be an effective way to inform a wide range of consumers about the latest technology and cost advantages of the telephone.

As Bell entered the 1930s, long distance service was becoming more accessible, and it remained a focus of our advertising and promotional materials throughout the decade. Several ads around this time were aimed at parents with children away at school, or friends working in different parts the country. Bell also began producing advertisements focused on real life situations, including a campaign featuring “The Watson Family” – with a father who brought “peace of mind at a trifling cost” by remembering to call home.

Bell also reduced some telephone rates around this time to help Canadians struggling financially during the Depression. Discounts on long distance service, which were generally only applied in the evening, became available all-day Sunday as well. Low rates and the convenience of communicating by telephone were also being advertised in small community papers to encourage farmers and those living in rural areas to sign up. Other ads encouraged all working members of a family to do their part and “chip-in to pay for the telephone” – which was quickly becoming a social necessity for young people. 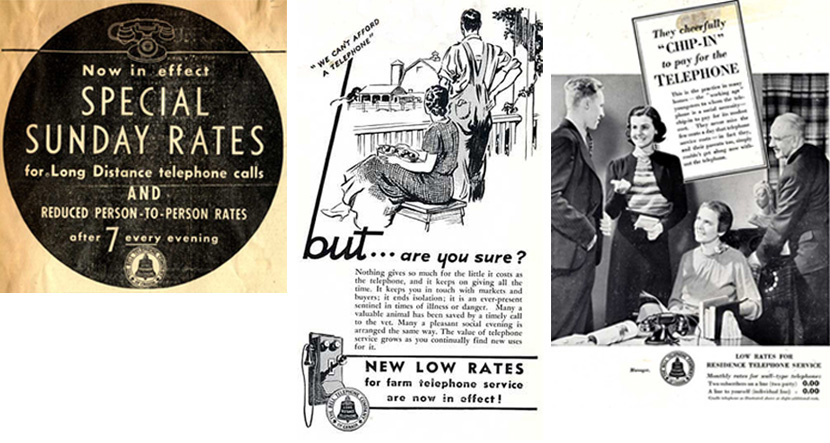 In the 1930s, radio and magazines competed with newspapers for the attention of the public. Bell’s Publicity Manager at the time, C.E. Fortier, favoured newspaper advertising, saying “it is the newspapers that we must continue to look at as the main vehicle in telling our story to the public.” In 1933, Bell’s Publicity Department radically updated its newspaper illustrations with a campaign using plastcine models instead of photographs of people. The innovative new ads were visually striking, and attracted a lot of attention at the time. 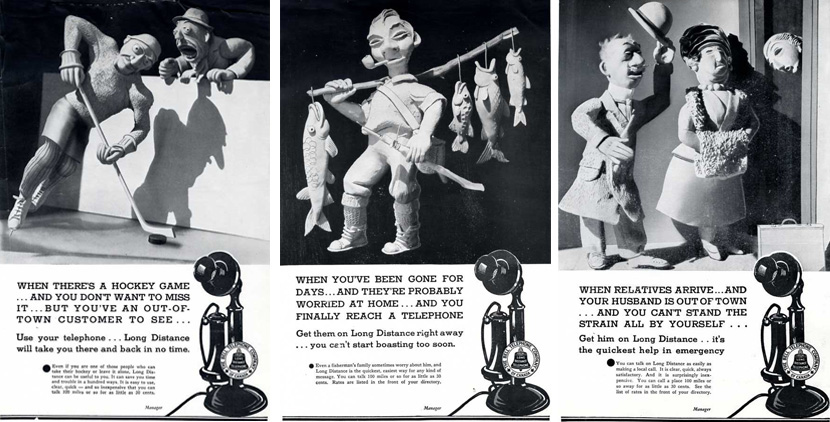 On January 25, 1931, a coordinated effort by Bell and the Trans-Canada Telephone System enabled customers to make a call across the country via an all-Canadian telephone line, stretching from Halifax to Vancouver. In the summer of 1932, Bell, the Canadian Marconi Company and the British Post Office worked together to launch telephone service to England via a UK radio channel, eliminating the need to use equipment from US-based AT&T. Conference-calling was launched shortly afterwards, garnering a great deal of publicity, with Bell ads encouraging families to schedule a time to meet regularly to catch up by telephone.